Cape Signature Homes is the first builder in the Fort Myers, Florida, area to offer homes constructed with the HercuWall wall system. 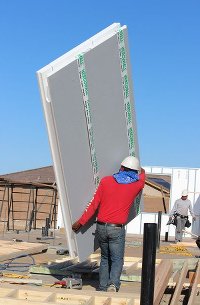 The HercuWall systems is a single product that combines many operations: composite concrete and steel structure, superior insulation, water and vapor barrier, window and door casings and sills, and attachment points for drywall and exterior finishes, according to Michael Niemann, founder and CEO of parent company HercuTech.

Sam Rashkin, chief architect of the Building Technologies Office in the Office of Energy Efficiency and Renewable Energy at the US Department of Energy, wrote in Builder magazine that ICPs can address some of the issues facing ICFs, such as a labor intensive construction process, while providing similar high performance.

"ICPs share many of the attributes of ICFs using concrete as a construction material: it is noncombustible, moisture resistance, insect resistant, dimensionally stable; impact resistant; and has excellent thermal storage," Rashkin said.

Gary Wolcott, president of Cape Signature Homes, told the News Press that he has built two homes using the system and has plans for an additional 25 homes using this method. The home in northeast Cape Coral encompasses 1,458 square feet and has three bedrooms, two bathrooms and a two-car garage. The spec home will be priced at $239,000.

One of the advantages of the system is the fast erection process for the walls. Each 4 foot x 9 foot panel can be easily lifted by one person. Wolcott said the panels for the spec home could be put in place in a single day. Then, the concrete pour takes about 90 minutes, compared to an all-day operation with ICFs.

Overall, a build with panelized system is much faster than wood-frame construction. Wolcott said the spec house should go from footers to occupancy in 90 days, and will be rated for 200 mph winds.

With insulation and air sealing factors, the home can use a 1.5-ton AC unit instead of a 3-ton unit for a standard house. The electric bill will be about $45 a month during peak cooling months in the summer, Wolcott predicted.

The cost is only about 1 percent more than a typical concrete house, Wolcott noted.

In the Phoenix area, HercuWall's home town, Meritage homes plans to construct a dozen spec homes using the system, as well as a similar number of spec homes in the Orlando market.

Insulating concrete forms, known as ICFs, are hollow foam blocks that are stacked into the shape of a home, reinforced with steel rebar and then filled with concrete. ICFs are shipped to the site and assembled according to the plans of the home. Most blocks are standardized, but can be customized for architectural features such as Palladian windows. 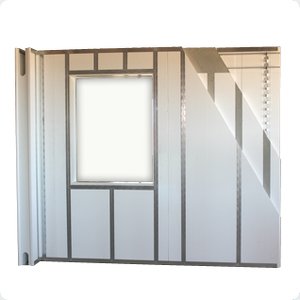 By contrast, the HercuWall panels are manufactured in a factory environment on computer-controlled equipment to exactly match the architectural plans for a specific project. The panels are delivered to the job site as a kit of numbered panels that are set up in numerical order forming the exterior wall according to the construction documents.

The HercuWall kit includes corner panels, straight wall panels and window and door panels. The panels are manufactured to exacting standards limiting variables and facilitating labor efficiencies. No cutting, sawing or other job site modification of the panels is required. No job-site scrap is generated. After the wall panels are installed, concrete is placed within the panels utilizing a grout pump. After the concrete has cured construction continues.

Niemann noted that during the build on a 2,400-square foot single-family home in Goodyear, Arizona, a framing crew of six set up the HercuWall system in less than three hours. Concrete was placed in the walls in two more hours. Niemann said this was not a handpicked crew and only the second HercuWall house this crew had constructed. The crew's first house took five hours.

Window and door openings are precisely located according to the plans. Windows are installed in minutes not hours. Walls will be straight and plumb. Teh Complexity of the plan may have some bearing on completion times but labor savings compared to other systems are dramatic, Niemann said.