Old Colony Habitat for Humanity in June dedicated its 8th home, an Energy Star home that will help its occupants live healthier and spend less on utility costs.

The house, located on Holman Street in Attleboro, will become home to single mom Sandra Hovagimian and her sons Khris and Kevin, ages 13 and 12, respectively.

The Holman Street home was made a reality through generous donations of cash, materials and time. With the support of corporate and community funding, more than 500 individuals alongside the homeowner contributed their "sweat equity" to build this home.

Rep. Kennedy said, "There's a lot of arguing going on in Washington right now, so it's so heart-warming to come home and see how our local communities are coming together to solve problems." Kennedy was visibly moved by the beautiful home and the deserving family.

"This dedication is especially gratifying for me," said Cunard. "It's unbelievable to see our dream become a reality. It's a gorgeous, healthy and 'green' dwelling and I'm so happy for Sandra and her kids to finally have such a home as their own. They have worked tirelessly, alongside our team, and it has truly paid off." Old Colony Habitat would especially 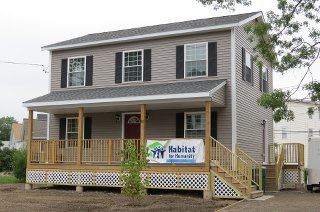 like to thank Mansfield Bank for their generous support.

The Holman Street home was the brainchild of Cunard, who spearheaded the project along with the family selection. Cunard led the project and drove the green and energy efficient features, making it perhaps the greenest Habitat home in the country. The project was completed under the direction of the current Executive Director Ken Owens and Build Committee Chairman Carl Adler.

Dennis Michaud, creator of Homebuilt and co-founder and former head of engineering and design of Blu Homes, an elite modular home builder, was a special advisor on this project. Michaud guided Cunard and his team to ensure the home was efficient and green.

"When Manny looked me up, I was happy to be a part of this amazing project," said Michaud. "I have been working to improve green and energy efficient home building for more than 10 years and I can't tell you how personally satisfying it is for me to see it all come to together for the Hovagimians." Michaud is an MIT-trained architect and built the first robotically manufactured full-sized home ever made. The home was exhibited at New York's Museum of Modern Art in 2008, when he was a post-graduate researcher at MIT.

Most Green and Energy Efficient Home So Far
The home is a three-bedroom, 1400-square-foot center-entrance colonial. It's Energy Star rated and equipped with Energy Star appliances and the most energy efficient insulation available, spray foam. The exterior and interior framing was pre-cut off-site keeping the home protected from the elements, especially mold. Finally, abundant energy-efficient windows bring the outdoors in and offer ventilation and protection, as needed.