Linda Lawrence was stunned when she opened her first month's electric bill. It was $40.67. That's unheard of in Florida. "I keep my thermostat at 77 degrees," she said, "And it actually feels chilly."

Lawrence was the first to buy a villa in Mirabella, a new development near the Gulf beaches, Sarasota/Bradenton, and the IMG sports community. 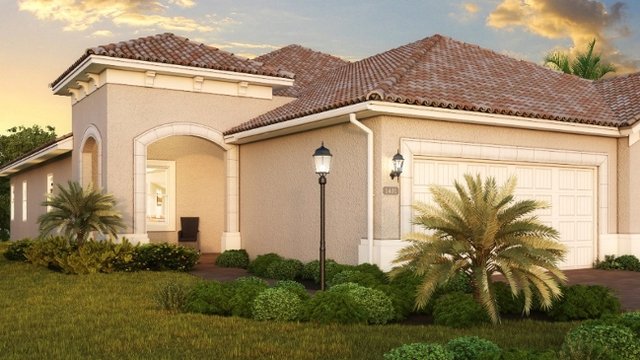 Marshall Gobuty, Mirabella's developer said he was concerned about global warming and what it will mean for the Florida's future." "I'm building the most energy-efficient homes in the United States. The houses are designed to save water as well as electricity," he said. "Building materials are recycled. "All this adds only about five per cent to the cost of these homes, and they have everything it takes for LEED certification."

LEED (Leadership in Energy and Environmental Design) is the U.S. Green Building Council's way to measure five design categories aimed at reducing the carbon footprint of new homes, while increasing the living qualities of those homes at the same time. The five ways in which certified homes are measured are:

Of the 647,800 single-family homes build in the United States in 2014, less than 1 percent met LEED standards. The percentage meeting those criteria on the Gulf Coast of Florida was even smaller, according to the U.S. Green Building Council (USGBC).

Mirabella's LEED certified homes use nearly 40 percent less energy than what is used in a typical home. They feature Energy Star appliances manufactured by companies including GE, Carrier, Argos, Shaw and Atrium.

Homes are inspected for quality control during each phase of the building process. Synergy Building Corp., the lead builder of Mirabella, insures that almost all construction waste is recycled.

Peggy Christ, who is with the Governing Council of a USGBC branch in Southwest Florida, said the biggest benefit that people get when buying a LEED certified home is a healthier home with less maintenance.

"These are among the most energy-efficient homes in the country," Christ said. "It's a win-win situation for the buyer and what they've done is just phenomenal."

Clarence Jones owned a home on nearby Anna Maria Island before relocating to similar-sized house in Mirabella. He has been saving nearly $200 a month on his electric bill. Jones credits that to the insulation that was installed when his home was built earlier this year.

"During the summer my electric bill would have been over $250, but the highest it's been here in Mirabella is $60," Jones said. "The temperatures in my house and in my attic are rarely more than 10 degrees apart — and an attic in Florida can be 150 degrees in the middle of the summer."

In addition to the Aurora Awards, Mirabella just earned LEED Platinum level certification. That is the highest level of certification a home can maintain and the only one that's earned that level in the state of Florida, according to Christ.

Mirabella's villa homes start at $270,880 and average around 1,500 square feet of living space. Comparable homes on Florida's Gulf Coast that lack the environmentally-friendly features of a LEED certified home start in the low to mid-$300,000's.

Christ said that today's homebuyers – particularly retirees on a fixed income – are looking for long-term savings on energy costs. This is particularly true in Florida, where air conditioning systems run year-round.

"LEED Platinum certified homes are exceedingly rare, particularly in this price range," Christ said. "These homes should be worth 10 to 15 percent more than they are because of the way they help you save on energy costs. They'll also have high resale value."

There are also several events each week that are aimed at bringing the community together. Marc Dillworth, who resides in Mirabella with wife Melea, says the couple has gotten to know a lot of their neighbors through the social gatherings.

"We came from a single-family home where you were on your own," Marc Dillworth said. "People are kind of isolated, but here it's more of a community feeling and this is what we want in this phase of our lives. It's a lot of fun and we're very happy."

Gobuty said he's leaving the door open for another LEED-based development in the future.

"I've learned to never say never, and anything is possible," he said. "What I have learned from the Mirabella Florida development is that being environmentally sound, sustainable and friendly to the Earth is a crucial component as the buyers we attract are willing to pay a little bit more for something a whole lot better. That means instead of being just a part of any next development, it would be at the center of it."

Read more about LEED and other green home certifications.