Homeowners Are Making The Grade When It Comes To Energy Efficiency

School is out and summer's heating up, so it's time for American homeowners to take action to conserve energy and save money. A new survey from Lennox found that while most homeowners pass the energy conservation test, they should brush up on their knowledge of Energy Savings 101 if they want to make it to the head of the class while staying cool and keeping bills low this season.

The Lennox Home Energy Report Card Survey, commissioned by Lennox Industries, a leading manufacturer of innovative home comfort products, and conducted by GfK Roper, found that saving money is a top incentive to conserve energy.In fact, 29 percent of homeowners would rather walk around in their underwear than spend money to cool down their home during the summer months.

Making the Grade: Homeowners Looking to Stay at the Top of the Class in Energy Efficiency 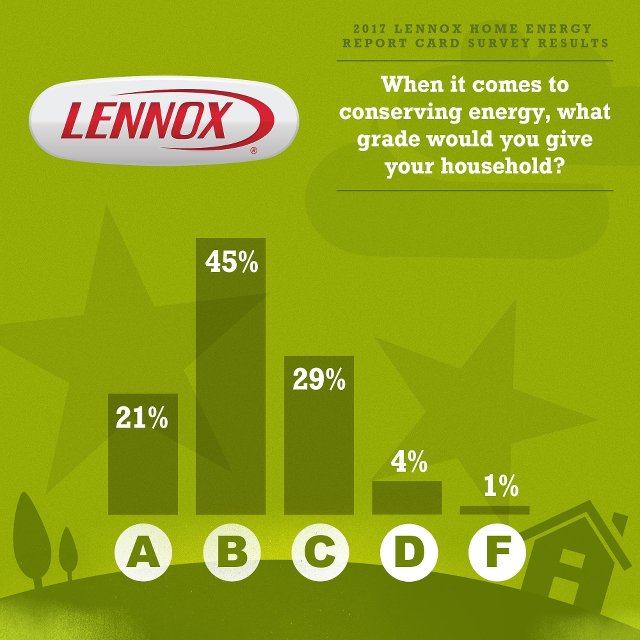 Homeowners give themselves above-average marks in energy conservation. Twenty-one percent of homeowners gave themselves an 'A,' (a 4 percent increase from 2016), 45 percent gave their household a 'B' when grading their household energy efficiency (a 6 percent decrease from 2016), and 29 percent gave themselves a 'C,' indicating more people are moving toward the head of the class when it comes to energy savings. Although a large majority (93 percent) have taken steps to conserve energy, it's clear that a number of homeowners see the opportunity for increased efforts.

When asked to name the biggest energy hog in the home, female and male heads of household were nearly equally identified (34 percent versus 32 percent), while 21 percent of the homeowners said it was the child/children who are the most wasteful. 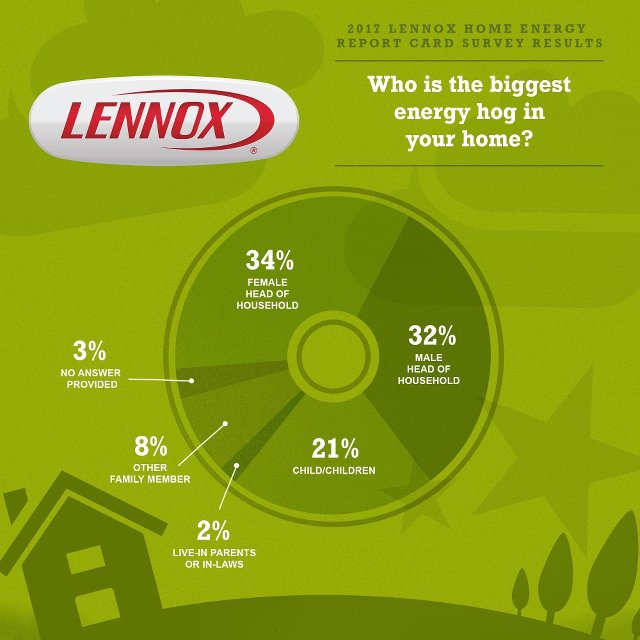 Homeowners conserve energy at home to save money (64 percent, down 5 percent from 2016) over helping the environment; however, if money was no object, they said they would be willing to invest in the following to increase energy efficiency: solar panels or appliances (39 percent this year, compared to 32 percent in 2016), more efficient windows (19 percent), high-efficiency air conditioner or furnace (19 percent), insulation (9 percent), programmable thermostat (7 percent), high-efficiency water heater (5 percent).

While homeowners show that they are willing to take steps to conserve energy, they are not likely to sacrifice their comfort over savings. When asked how willing homeowners are to turn the thermostat up to save $50 a month on their utility bill, 39 percent would be willing to raise their thermostat three to six degrees, while 25 percent would not go any higher than one or two degrees.

Changes in weather aren't the only reason homeowners are motivated to crank up (or down) the A/C. The Lennox Home Energy Report Card survey indicated homeowners adjust the temperature on their thermostat when sleeping (57 percent), entertaining (46 percent), cooking (21 percent), exercising (14 percent) and "making whoopee" (12 percent). The survey also found that nearly half of American homeowners will turn on their air conditioning system for the first time of the year in May or June, while 7 percent of home owners run their A/C system year-around. 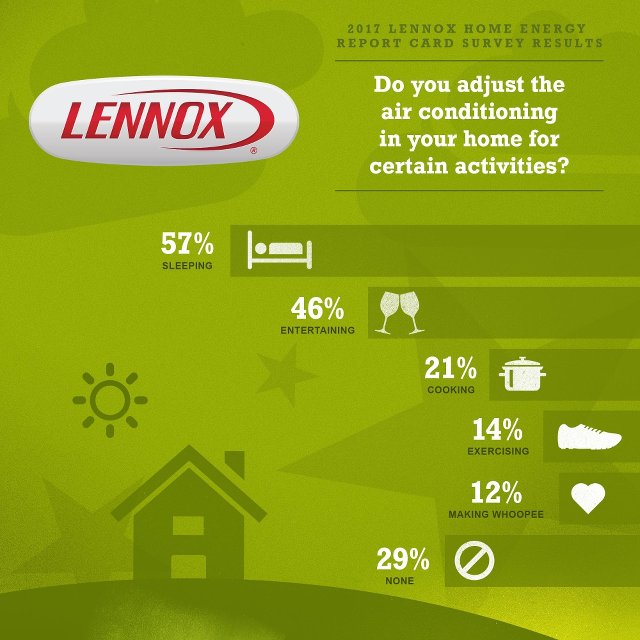 While many people proactively take positive actions toward lowering energy bills, some do earn a failing grade for doing more harm than good. Twenty-four percent of homeowners said they have turned off their cooling system completely during hot days or heating systems on extremely cold days to help conserve energy. "While turning off your air conditioning system seems like a good idea in theory, it actually is forcing the unit to work harder," said Davis. "Doing so uses more energy and therefore costs the homeowners more in the end. Instead of turning your system on and off, we recommend lowering or raising the thermostat – or better yet, installing a smart thermostat, such as the Lennox iComfort E30, which will do it all for you while it's saving you money."

Luckily, homeowners have an opportunity to improve their grade by entering the Lennox Energy Savings Superstar Contest.  Between July 1 and August 31, 2017, Lennox invites homeowners to join in on the "Energy Savings Superstar" contest on Lennox.com/residential by submitting a unique and innovative home energy savings tip, along with a fun photo depicting their suggested tip. The grand prize winner will receive up to $10,000 in energy efficient Lennox heating and air conditioning products, along with other "cool" prizes.