How to use your refrigerator in the most efficient way

Give it up for the appliance manufacturers. Over the last 45 years, they’ve succeeded in reducing the energy consumption of the average household refrigerator by 75 percent, according to consumerenergycenter.org. Even so, the typical household refrigerator consumes almost 14 percent of the total electricity used in a typical home—second only to air conditioners among all household appliances. You can augment the energy savings that manufacturers are building in to newer refrigerators by using them wisely. Here we’ll share the best practices for selecting a refrigerator model, placing it within a kitchen, setting operating temperatures and storing foods and beverages—all from an energy skinflint’s point of view.

Given the refrigerator efficiency trend over time, it may seem obvious that the first step to energy savings would be to buy a new refrigerator. While the energy performance of refrigerators has improved at a rate of two percent a year over the last 40 years, a new Department of Energy standard that took effect in 2014 requires next-generation refrigerators to be 25 percent to 30 percent percent more efficient than those manufactured after 1990, the date of the last applicable government mandate.

Over time, new preferences in refrigerator size and style preferences have emerged. In typical homes today, refrigerators are 20 percent larger than they were in 1975. The appetite for more complex door configurations has grown, along with a yearn for through-the-door ice and water dispensers.

If you’re in the market for a new refrigerator, consider which door configuration works best for you and your family, but also consider how it affects the refrigerator’s energy performance. The infographic below provides the grounds for comparison.

Among the use factors that affect how much energy a refrigerator needs to keep its contents chilled are:

While it seems intuitive that French doors would provide the best set-up for conserving energy because most often only one side would be opened at a time, that turns out not to be the case. Instead, more often than not, both doors are opened as users search inside, a lot of chilled air escapes and the refrigerator has work harder to bring it back to temperature once the doors are closed. It’s also probable that because they have more linear feet of edges and seals, models with complex door configurations tend to leak more even when doors are shut. 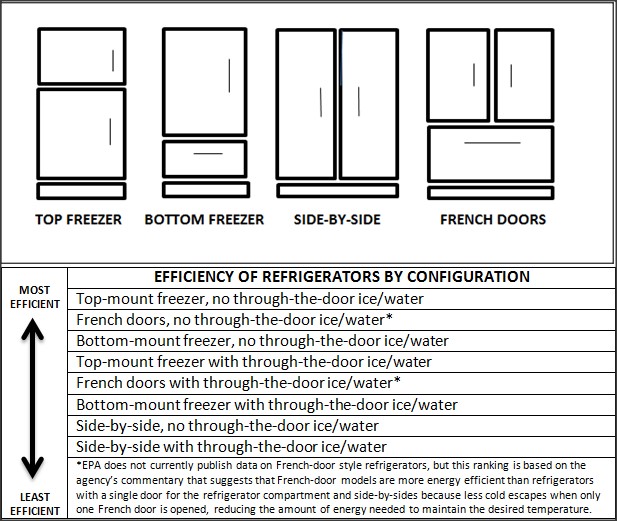 You should also check the door seals routinely for tightness and wear. Insert a slip of paper between the door seal and opening frame and try to slide it up and down, and from side to side. If there’s slippage, you’ll need either to replace the seals or adjust the door alignment.

Maintaining the right temperature settings is the key to keeping your foods fresh and your energy consumption down—not too warm, not too cold. The optimal temperature for the refrigerator compartment is 40 degrees Fahrenheit. The freezer should be 0 degrees F.  It’s a good idea to check these temps with a refrigerator thermometer from time to time to make sure the appliance’s thermostat hasn’t gone out of adjustment.

Let hot foods cool down to room temperature before placing them in the refrigerator or freezer. Note that most foods can remain at room temperature for up to two hours without danger of spoiling.

Cover foods that you store in the refrigerator. Place them in containers with lids, bowls covered with plastic wrap or sealed bags. The smoother the outer covering of stored foods, the less the refrigerator has to work to chill the surfaces.

While observing any of the practices discussed above will cut refrigerator energy consumption incrementally, if you’re serious and have an old refrigerator, get a new one of the most efficient size and design. Consider only models that bear the yellow Energy Star labels and go straight to the projected yearly energy-use figure. Bear in mind that other data found on Energy Star labels are useful for comparison only to other models with the same door configuration. It’s a quick and easy way to tell if the refrigerator will truly be energy efficient.

Michael Chotiner is a home DIY expert who writes about refrigerators and other kitchen appliances for The Home Depot. To research energy-efficient refrigerators, including styles discussed by Michael, you can visit the Home Depot website.