Over the past several years, the ductless mini split heat pump market has grown 20 percent or more per year.

Once the domain of add-on HVAC for remodeling or additions, ductless mini splits are now moving into the mainstream in the North American market as manufacturers roll out whole-home solutions for new homes and retrofits. They're also a common option for very tightly built homes with heating and cooling loads below the range of most conventional equipment.

Like other heat pumps, mini splits move heat between the indoors and outdoors, rather than generating heat. They leverage heat existing in the environment rather than burn fuel to release energy, which is one of the reasons they are so energy efficient. Also, recent development of inverter based compressor technology has boosted efficiency because the system can run only at the level required to meet demand.

Ductless heat pumps are a quick and non- invasive retrofit installation and for new construction can reduce installation costs with little to no ductwork required.

In an exclusive interview, Andy Armstrong, vice president of marketing for Fujitsu General America, discussed the growth of the mini split category and the transition to whole-house solutions.

PGH: Are mini splits becoming more accepted in the marketplace?

AA: I've done some home shows, and talked to homebuilders, and I've been surprised at how often I've heard the phrase "I really don't like ductwork." I think consumers are starting to understand that traditional ducted systems may not be the best way to deliver comfort into the home. So as people start to pick that up and there is more education, I think we'll see a trend towards the technology because it really is a better solution and certainly more efficient.

PGH: Are there issues with homeowner acceptance because of the visual presence of the wall cassettes? 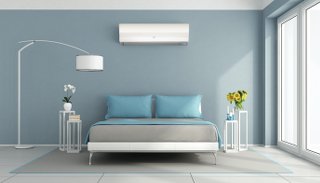 AA: Not really, and the reason being is that we have a lot more solutions. Today there are about eight different solutions you can use to bring those BTUs into the room. It can be a wall-mounted unit like you're traditionally seeing in the ductless system. That's how people perceive the technology. But now we have the ability to put that unit in a console on the floor so it's much less conspicuous, or we can hang it from the ceiling, which is arguably not a whole lot less conspicuous than the wall unit but we also have cassette units that mount into the ceiling so it becomes much less conspicuous. In addition we now have ducted systems that will look exactly like a traditional system but there will not be quite as much duct to mess with, so there's a lot less duct loss in terms of the efficiency of the system.

AA: It depends on the design and what you're really looking for. That's why custom homes are the most common applications for whole home. It starts with asking those questions of the homeowner such as where are you going to live and how do you want the house zoned? Because we have a bad habit in this country of owning a 2,000 square foot house and living in 600 square feet, and nothing does a better job of taking advantage of that living style than ductless. We can put in one system that handles the kitchen and the family room and the common living areas downstairs and then upstairs we have separate units for each bedroom and a common unit for the hallways and bathrooms and things like that. So now you've got maybe five zones in the house, but you really can break it down to the three or four rooms that you live in all the time and those other three rooms you can keep turned way down. That capability translates to significant savings on your electrical bill.

AA: For us an important task is helping contractors share the vision of what a ductless system can do for their customers and the whole home application because it's not traditional. When you go to the Midwest and say whole-house ductless, people look at you like you're nuts. So we need to help our contractors understand how to solve this and explain the zoning and control airflow and inverter technologies and the sound levels and humidity control, and once homeowners understand all those benefits, they begin to see they really don't want ducts as all.

PGH: What are the latest developments for Fujitsu mini splits?

AA: One that we're really excited about is a new addition to our residential VRF line, it's essentially one outdoor unit that can support up to nine indoor units with only one set of refrigerant lines coming inside. You branch off the line and each of those units just takes what it needs off of that main trunk line of refrigerant to heat and cool each individual space of the home. 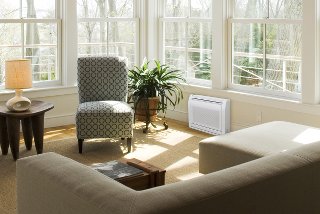 We're actually going into homes that have ductwork and putting in these type systems. With the systems that will handle up to nine different indoor units you can really offer a lot of flexibility.

With the inverter technology we are actually varying system based on the zones that are occupied, as opposed to just using a bypass duct or running the air conditioner full blast and cooling spaces very quickly, which is not comfortable and you're not getting the humidity out.

PGH: Will there be all-mini split developments like there are all geo-thermal developments?

AA: I expect over time we'll see some subdivisions going that way, but right now it's a richer solution, you're paying more than just getting a one-for-one trade off with a traditional HVAC system. The builders are very focused on selling homes and homeowners are buying granite and hardwood and things like that so it's hard to make that leap to the higher end HVAC systems, so I think we'll be concentrated in custom homes for a while but we'll start to slip into the mass market whole home soon.

Gary Wollenhaupt is an experienced writer and editor, with a background as a daily newspaper reporter as well as corporate and agency public relations and marketing. He is constantly looking for affordable green upgrades to make to his home in eastern Kentucky.