ICFs Behind the Walls of Dream Waterfront House 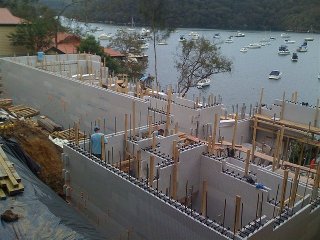 He turned his home project into one of the highest rated episodes of the Grand Designs Australia series as calamities beset the dream house built in the idyllic and leafy settings of Cottage Point in Sydney.

Series 1, Episode 8 of Grand Designs Australia documented the Muirhead's journey to building a dream house on the largest waterfront block of land in Cottage Point. Designed by Richard Cole Architecture and engineered by Barrenjoey Consulting Engineers, the Balinese resort-style mansion featured pavilions, an infinity pool, five bedrooms, four bathrooms, a steam room and even its own nightclub.The difficult access and steep sloping block presented challenges to the construction.

Take a video tour of the house.

The ZEGO FireFORM insulated concrete form building system was chosen for its ease of material handling and speed of construction along with its versatility and fire rating.

Approximately 650 square meters of ZEGO insulated concrete form walls were installed by ZEGO Installers, Conty Constructions in only one week.

Not one to do things by halves, Muirhead's mansion will have Balinese Pavilions, an infinity pool, its own nightclub, five bedrooms, four bathrooms and a steam room. It all faces a private beach with boatshed and speedboat. The biggest battle for Drew, who was project managed the build was the steep sloping block and access.