It’s a simple purchase you can make for $5 or less that’ll pay big dividends for the environment this Earth Day and put money back into your pocket.

Installing just one LED light bulb will generate energy savings enough to buy as many as 40 lattes, cover 16 trips to the movies or pay for some of your other favorite treats. Throughout the month of April, GE is encouraging consumers to make a pLEDge to switch even just one light bulb to an LED. To help jumpstart their journey, GE is offering printable LED coupons in conjunction with the pLEDge, as well as a sweepstakes that’ll earn one lucky winner a whole-home LED makeover.

By 2020, half of all residential light sockets are expected to be LED. Today, however, LEDs represent just 20 percent of light sockets, leaving many consumers missing out on their benefits.

“LED technology has grown in leaps and bounds over the past few years,” said Daraius Patell, North American Consumer Leader, GE Lighting. “A few years ago, LEDs were $40. Today, you can buy an LED for less than $5 for every socket for every room in the home and get them in the traditional shapes with the great light quality you’ve come to expect from your home lighting. With their energy savings, long life and environmental impact, once you switch just one, you’ll realize LED benefits and never look back.” 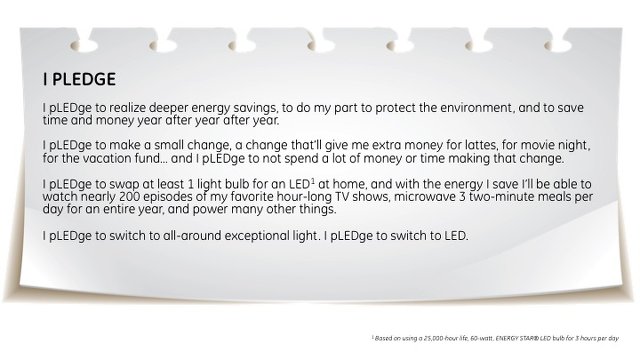 For more information, to take the pLEDge or to join in the sweepstakes visit www.GELighting.com/pLEDge.