Most homeowners give themselves a B in energy savings - what's your grade?

The final school bell has sounded, and it’s time to learn a new subject:  how to beat the summer heat without breaking the bank.

The annual Lennox Home Energy Report Card Survey found that most American homeowners are looking to move to the head of the class when it comes to Energy Savings 101, and still have a lot to learn about keeping costs low and comfort levels high.

The Lennox Home Energy Report Card Survey, commissioned by Lennox Industries, a leading manufacturer of innovative home comfort products, and conducted by GfK Roper, identified that while comfort is key to consumers, saving money trumps all.

In fact, the survey found that 26 percent of homeowners would rather walk around in their underwear than spend money to cool down their homes in the summer.

“Homeowners recognize that while they are doing a pretty good job at conserving energy, there is still room for improvement,” said Lennox energy efficiency expert, Jennifer Franz. “Saving energy and reducing electricity bills doesn’t have to take a lot of time and effort. In fact, a few simple steps, from installing a smart thermostat to keeping air filters clean and changing them regularly, can help homeowners increase comfort levels, control costs and conserve energy this summer.”

Making the Grade: Homeowners Looking to Be at the Top of the Class in Energy Efficiency 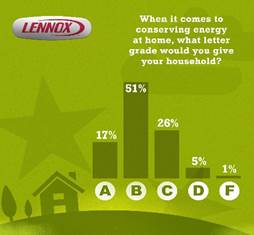 In addition, homeowners surveyed gave insight into their money-saving practices, indicating that if their A/C required repair, they would rather remove clothing (50 percent), take a cold shower (25 percent) or go to a local pool (15 percent) than call a repairman.

Passing the Test: Homeowners Willing to Go Green to Save Some Green

Saving money never goes out of style. In fact, it continues to be the main driver of why people participate in some kind of energy conserving activity (68 percent), versus helping the environment (27 percent). In addition, homeowners surveyed would be willing to unplug or shut off the following for two weeks:  washer/dryer (21 percent), television (19 percent), computer (17 percent), indoor lights (14 percent), cell phone charger (13 percent) and air conditioning (11 percent) to save energy and money.

Tough Subject: The Battle of Cost vs. Comfort

Some people can’t take the heat – and some can. Homeowners surveyed would be willing to turn up the temperature on their thermostat the following number of degrees above where they typically set itduring the summer months if they could save $50 a month on their electricity bill:  10 degrees or more (10 percent), seven to nine degrees (11 percent), three to six degrees (43 percent), one to two degrees (23 percent), unwilling to change (12 percent) and zero degrees (1 percent).

“Being more energy efficient doesn’t have to be a hassle. Just like the upkeep on an automobile for improving mileage and the vehicle lifespan, some DIY updates and regular home maintenance, such as on a home’s cooling equipment, can help homeowners achieve significant savings on monthly energy bills -- and high marks for energy savings,” says Franz. 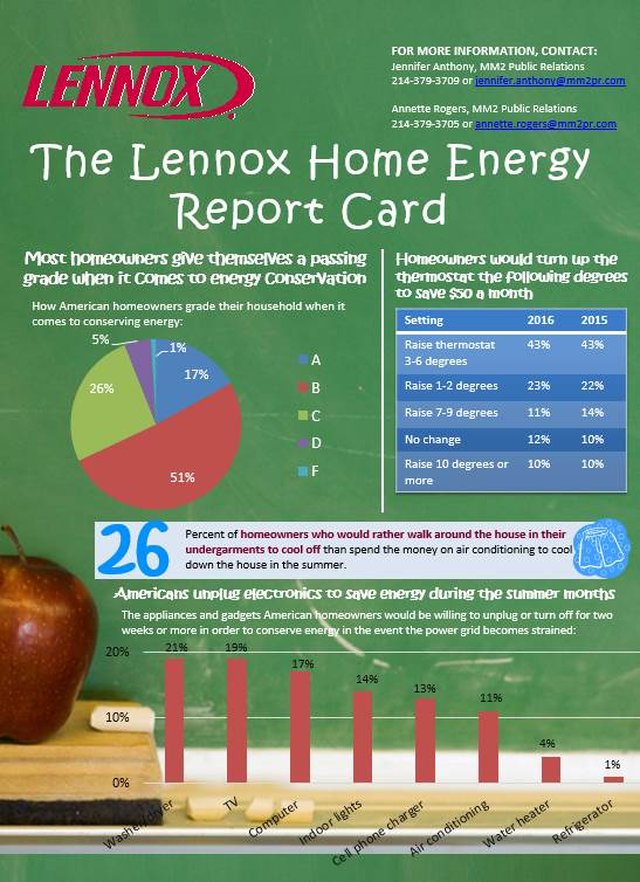