Nest, maker of one of the most popular the smart thermostats, is will push out special instructions to the thermostats in preparation for the solar eclipse on August 21.

Here's a blog post from Next explaining the preparations for this rare astronomical event that could impact the nation's solar power output.

On August 21, for the first time in 99 years, US residents from coast to coast will experience a total solar eclipse. You’ve probably been hearing about how to watch safely, where and when you can view the eclipse, and how eclipses work. But you may not have heard about the impact the eclipse will have on our energy system.

With more than 100 million solar panels installed in the US, generating enough electricity for over 8.7 million homes, the sun has become an important source of electric power. But during the eclipse, solar energy production will be reduced.

In fact, Bloomberg estimates that reduction could be as large as 9,000 MW, the same amount of power in about 4 billion AA batteries. At Nest, we think of these high-demand times on the energy grid as rush hours. We all know how frustrating rush hour traffic can be. A trip that should take 10 minutes takes an hour. It’s inefficient, it’s wasteful, and it’s no fun when everyone wants to get to the same place at once.

The same thing can happen with the electric grid when there’s particularly high demand for energy, like on very hot summer days. Many people need additional power at the same time. 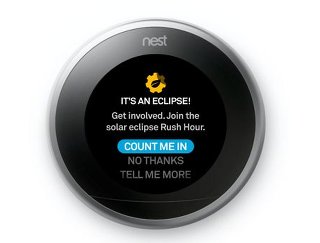 The draw on the grid increases significantly and sometimes requires extra power plants to come online to meet that need, often relying on fossil fuels. That’s why we created our Rush Hour Rewards program in 2013. The idea was simple: by partnering with utilities, we could help customers use less energy when everyone else is using more. By pre-cooling or automatically changing the temperature in your home by just a few degrees, your Nest Thermostat can help reduce energy use during these rush hours while still keeping you comfortable.

And in the four years since the program began, hundreds of thousands of Nest Thermostat owners have joined the Rush Hour Rewards movement across the country. Utilities love Rush Hour Rewards because it helps balance out energy supply and demand, which saves money and reduces carbon emissions. Customers love it because they’re rewarded for using less energy when it’s needed most.

The upcoming eclipse represents an opportunity for a special energy rush hour. Instead of being caused by high demand, this rush hour will result from a temporary reduction in the clean energy supply. During the eclipse, as less light reaches solar panels across the US, solar energy production will drop, meaning more power plants may have to be fired up to cover the shortfall for just a brief time.

So, we’re encouraging people across the US to help offset this drop in energy production by pre-cooling their homes before the eclipse. If you don’t own a Nest thermostat, you can manually adjust the temperature by one or two degrees during the eclipse. If you own a Nest Thermostat that’s eligible to participate*, we’ve made it easy.

Together, we can meaningfully reduce our energy demand during the eclipse. So on August 21, don’t forget your eye protection. And don’t forget to join the Nest Solar Eclipse Rush Hour to help reduce our impact on the grid during this rare event.

*Find out if you’re eligible to participate.