Imagine a cozy cottage surrounded by forest, built with your own hands. But it's a not a gingerbread dollhouse, but a modernist design with a Frank Lloyd Wright flair.

Shelburne Falls, Massachusetts-based Noble Home has been designing and shipping home shell kits since 2007, aimed at people who want more than a cookie cutter tract home.

After an education in product design, Noah Grunberg, founder and chief designer for Noble Homes, followed in his architect father's footsteps and studied at the Frank Lloyd Wright School of Architecture. He and a partner started building and remodeling homes. They saw that customers often asked if they could help with construction, such as painting or hanging dry wall. 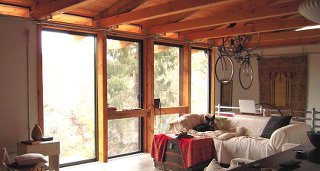 "We go the notion that owners want to invest their sweat equity, both to lower costs but also as a point of pride, so many people have this dream of building their own home, but construction is so complex these days it's almost unobtainable for the regular do-it-yourselfer," Grunberg said."

So they spent several years developing a building system so people could construct their own homes.

"We use some newer techniques and materials that are more fit for not only creating high performance homes and affordable homes, but something that can be built by your average weekend warrior," he said.

Today the company offers three base models that are custom designed for each lot, and sold and shipped as a kit. The wooden parts are precut and holes are predrilled so there's very little need for custom fabrication on site. The homes are designed to take advantage of passive solar heating, and use non-toxic materials and FSC certified lumber. The wall systems use Thermasteel insulated panels, with R value up to 30 percent higher than conventional construction. The wood timbers are used in the roof structure primarily. 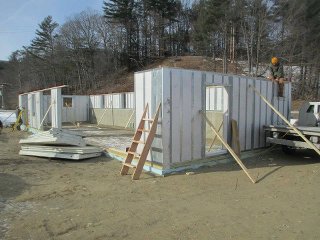 The newest model is the Noble Home Z, that's designed to use 100 percent passive solar heating, and which could be net zero with the addition of solar panels. It's based on the 20-foot interior width platform of the standard 20-ft Noble Home design. The other model is a 16-foot wide platform, ideal for homes in the 300-600 square-foot-range. The homes can built to any length based on a four-foot structural unit.

The Frank Lloyd Wright philosophy that Grunberg learned building his own desert shelter at the Taliesin school in Scottsdale, Arizona, is reflected in each design.

"The nature of these homes is they are site specific, the majority are passive solar to some extent which really requires looking at the building site and solar exposure and siting it with the landscape," Grunberg said. "We follow the philosophy of working with nature rather than against it, really designing a home that fits in the local ecology."

That approach seems to attract prospective homebuyers with a similar outlook.

"A lot of our customers tend to be homesteader types, really into nature," he said. "They really want a home that blends into the land a little bit more, something a little woodsy rather than a neocolonial or neo-Victorian that will stick up out of the hillside."

The bolt-together approach attracts people without much construction experience but who want to tackle a major portion of the build. Owners often serve as general contactors, hiring sub contractors for foundations, plumbing, electric and HVAC installations. But they like to handle the labor themselves. 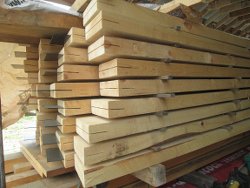 "About half our customers do that stuff with their own hands, and we get photos from a school teacher in Vermont or a young family in Pennsylvania with 4 little kids, and we're amazed they can really build their own house," Grunberg said.

The first Noble Home Z is being built in Minnesota, by a couple who is blogging about their project here.

There are only a few key differences between the Noble Home Z and the standard models. One distinct design change is the removal of the rafter tails and clerestory windows from the original models. A more modern, better-insulated overhang takes their place in the model Z, so that heat loss through these is eliminated. The roof pitch allows for an overhang that properly shades the interior from summer sun while admitting passive solar heat in the winter.

The next model under development is a replacement for manufactured housing in trailer parks. The idea is to design a kit home that will fit on the standard pad in a mobile home park.

"We're trying to bring the price down, it may not be as inexpensive as a new mobile home but will be something that appreciates in value like a real house and will perform better, and the owners won't spend $3,000 a year in oil to heat the place," Grunberg said.

So far not many customers have pursued green building certifications, but the company does work with raters to develop a HERS rating. In Massachusetts, an appropriate HERS rating will allow a home to meet the Stretch Energy building code.

"We're finding a niche in that respect, having a house that meets the code without too much trouble," Grunberg said.

Gary Wollenhaupt is an experienced writer and editor, with a background as a daily newspaper reporter as well as corporate and agency public relations and marketing. He is constantly looking for affordable green upgrades to make to his home in eastern Kentucky.