In January 2017, new residential building codes in Ontario mandate a 15 percent increase in energy performance, including the use of a vertical drain water heat recovery system.

This is the first major SB-12 update since its inception in 2012, and it will come into effect for all permit applications after December 31st, 2016, according to the Ontario Ministry of Municipal Affairs and Housing.

Effective Jan. 1st, 2017, drain water heat recovery is mandatory in all Ontario Building Code SB-12 Prescriptive Paths. To meet the mandatory requirement, systems must have a minimum rated efficiency of 42% when tested according to CSA B55.1 and must also comply with CSA B55.2 B55.2 for safety and quality. 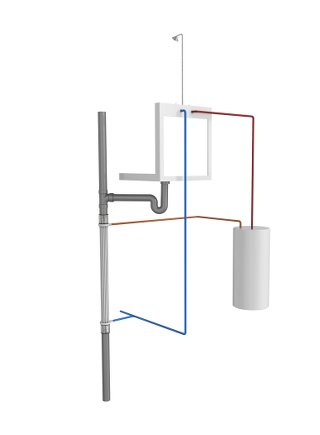 "Overall, the ruling is a positive development for the technology," Velan says. "It shows that the technology is proven and also that the path to adoption is through energy codes which provide a win-win by allowing homeowners to save energy over time with a technology they probably otherwise would never have thought of, and also allowing the province to limit demand for energy as more homes are built."

Drain water heat recovery systems are also required in Manitoba. In some areas in the United States, including Washington State, the systems contribute to points for green building programs and also contribute to a home's HERS index by RESNet.