The Desert Rain House located in Bend, Oregon, has become the first residential compound to earn Living Building certification, the most ambitious and optimistic international standard of sustainability in the world.

Developed by the International Living Future Institute, the Living Building Challenge certification requires actual, rather than modeled or anticipated, performance across environmental, social and community impact. Therefore, projects must be operational for at least twelve consecutive months prior to evaluation. 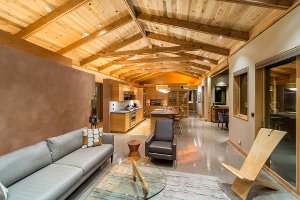 “Barbara, Tom and the entire project team made a serious commitment to becoming what is now a powerful demonstration for regenerative design,” said Amanda Sturgeon, CEO of the International Living Future Institute. “They have also provided a beautiful and compelling blueprint for others to be inspired by and to follow. Certification of the Desert Rain marks a defining moment in the Living Building Challenge – a fully certified, multi-family residential project that is beautiful, just, and has a net zero impact on the environment.”

Six years in the making, Desert Rain earned certification by demonstrating that its five buildings produce more electricity than residents use each year and that 100% of water requirements are met by captured rainwater. In addition, toxic chemicals were screened from all building materials and all wood was reclaimed or Forest Stewardship Council certified. Human waste from the three residences is composted on site and all greywater is processed and reused for irrigation.

“Barbara and I built Desert Rain as a demonstration project and personal residence. If a residence and two apartments like this can be built in downtown Bend, Oregon, they can be built in any municipality,” said Tom Elliott, 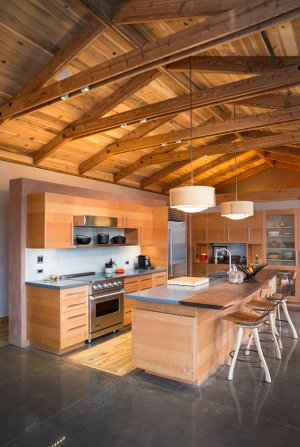 co-owner with Barbara Scott. “We hope the project will inspire others to reflect on the possibilities in their own built environment.”

Desert Rain has produced more energy than it used in each of the past three years due to its highly efficient design incorporating passive solar and a very tight building envelope.

“We can’t continue thinking we are building a better world by making a “less bad” version of the world we have created,” said Elliott. “The Living Building Challenge forces us to think in terms of a new paradigm.”

Barbara Scott, co-owner of Desert Rain, said, “It’s important to remember, Desert Rain is the loving and hard-earned result of a multi-year collaborative project between owners, designer, contractors, sub-contractors and the community at large. Bend is now home to one of the greenest buildings in the world.”

James Fagan, one of the owners of the general contractor Timberline Construction said, “Desert Rain was at least as much process as project. The technical challenges were many and some quite daunting. Together we managed to find our way to a fulfilling and beautiful outcome. As a general contractor on our first Living Building project, it was inspiring to be able work through this challenge with such an amazing team.”

“Plants take longer to grow in the desert, but when there is a bloom it is stunning. The Desert Rain House is the product of years of

thoughtful planning, design and perseverance led by two courageous owners,” said Jason F. McLennan, Board Chair of the International Living Future Institute and Founder of the Living Building Challenge. “What they have achieved is an example for us all: a better way of living and perhaps more importantly for all people touched by the project, a new way of thinking that will seed further blooms of change.”

After six years of research and design (including one complete do-over) Scott and Elliott moved in to the home in 2015. The finished product came in at $3.48 million, about $638 per square foot.

In the first two years, Elliott and Scott used nothing but the rain collected in their 30,000-gallon cistern and the house generated nearly 14,000 kilowatt hours of power — about enough to power an average house for a whole year.