In 1892, the American Encaustic Tiling Company (AETCO) built an expansive tile manufactory on the banks of the Muskingum River in Zanesville, Ohio. Having outlived its usefulness, the factory was deconstructed. Pioneer Millworks acquired 13,000 board feet of Red Pine planks and timbers from the demolition.

Over the past 25 years Pioneer Millworks has kept more than 25 million board feet of wood out of landfills. “If we stop and think about the history of this wood, we begin to see why it’s 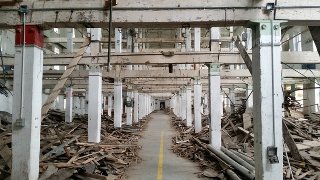 so prized: these planks and timbers were cut in the early 1900s from trees that probably started to grow in the 1800s. Now, after 124 years in this factory, these timbers and planks will begin a new life as eco-friendly flooring, paneling, and more for homes and businesses,” states Jered Slusser, reclaimed wood expert at Pioneer Millworks.

Red Pine was a significant component in AETCO’s building construction, as it was for many structures during the Industrial Revolution. The unique features of this reclaimed Red Pine are the original paint and wear marks as well as a striped appearance on the planks. “These stripes are caused from the ceiling joists that ran along the underside of the floor, leaving a “shadow” when removed after a century in place,” explains Slusser. “The wood also has tones of red and yellow, with streaks of resin, numerous knots and holes, as well as minor surface cracks, which all adds character and intrigue.” 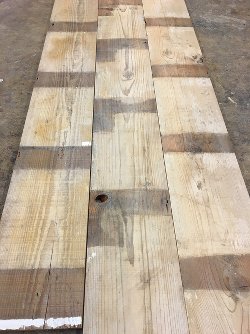 A collection of the Red Pine from the AETCO plant was recently milled into paneling for a major retailer’s project. The white paint was removed and the boards were finished with a matte Polyurethane. The joist shadows on each plank create a striking pattern and a reminder of the wood’s former life.

When demolition of the Zanesville plant began, the original facades were unearthed, revealing ‘American Encaustic Tile’ painted on the brick exterior. A pioneer in the tile industry in 1875, AETCO eventually outgrew its original showroom in New York City and expanded operations to Zanesville in 1892. A massive producer of floor tiles, wall tiles, and accent tiles of all sizes, patterns, and colors, AETCO was considered the largest and most distinguished tile manufacturer in the world at the turn of the 20th century, employing at least 1,000 people and cranking out unique ceramic tiles for homes and businesses across the nation.

To date, Pioneer Millworks has rescued over 25 million board feet of old wood from rot and landfills, giving it new life as flooring, paneling, millwork, cabinetry, and more. All manufactured in the USA from New York and Oregon — in a way that’s healthy for customers, employees, and the environment. Pioneer Millworks is FSC certified and Green America approved. All of their products are LEED point eligible.