Most consumers know about smart homes, but they just don't want one.

A recent survey found that 81 percent of consumers are aware of smart homes, but only 26 percent want one at the moment, according to a report by accounting firm PricewaterhouseCoopers.

PwC says the internet of things (IoT) is set to transform—and disrupt—the way we live. For now, much of this movement has centered in and around the home. Inside our four walls lies tremendous opportunity and potential for connected products to make our lives easier, safer, less stressful.

So PwC interviewed more than 1,000 consumers via an online survey to uncover their views about smart homes. Tech companies large and small are turning out smart and connected products for the home -- thermostats, ovens, light bulbs, toilets -- but those products aren't flying off the shelves.

The survey found that consumers with a household income of $100,000 or more are most likely to interact with smart home devices (43 percent), followed by men (32 percent).

Perhaps not surprisingly, consumers over the age of 50 are the least likely to interact with such devices (13 percent).

Those who do use the devices, satisfaction is in the 90th percentile for both the device itself but also with the supporting apps.

One of the key factors in satisfaction is a link between a home device and a mobile device through an app. Some 74 percent of respondents said they use their smart device more because they can connect with it through a smartphone or tablet.

Only 10 percent of consumers said they weren't happy with their smart home devices because they were not as helpful as anticipated, or they forgot about the device all together.

Of course, convenience is a key factor in smart device adoption. Sixty percent of women would pay extra for personalized service from their smart devices.

Security and privacy were raised as concerns by 24 percent of the respondents.

Interestingly, only 6% of current smart home device users ranked energy savings as a motivator for purchase. This represents a sizable disconnect from non-users, who told us that saving money would hugely motivate them to future purchase. PwC believes the disparity stems from lack of communication, not a lack of desire. Cost savings represent compelling motivation; however, if not communicated clearly, the benefit might well be overlooked.

Currently the marketplace is segmented between those who purchase in a single device, such as a smart thermostat, and those who invest in a wholly connected house.

The upshot: Unless the product meets a specific need, solves a problem, or smooths over a major inconvenience, consumers can’t justify the purchase— especially for the big-ticket items like a smart refrigerator. This means the potential loss of opportunity to experiment with smart home devices, and a larger need to demonstrate legitimate value, PwC noted. 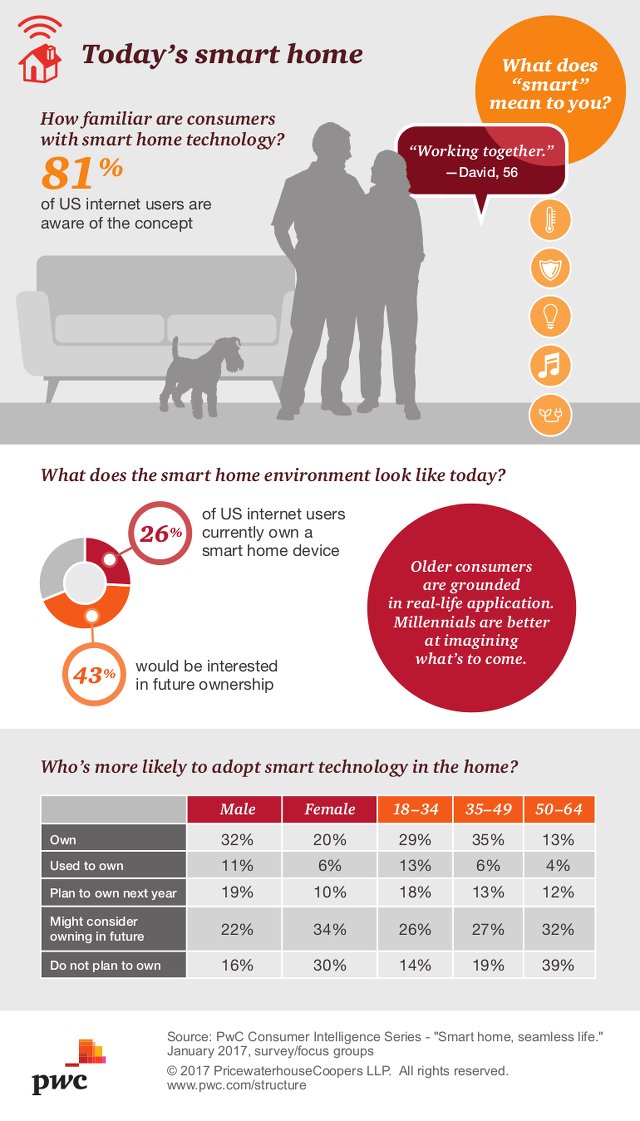