Energy Efficient Homes Could Save Lives

Reducing air pollution from burning energy to heat homes could save thousands of lives in the United States alone.

Previous research found that that 20% of urban air pollution is caused by burning domestic fuel, with the majority of those emissions due to burning wood. However, those 10,000 deaths caused by keeping homes warm paled in comparison the estimated number of deaths from coal power plants: 21,000.

The health hazards are due to PM2.5, particulate matter that measures 2.5 micrometers or less. These tiny particles are small enough to penetrate the lungs and then work their way into the major organs and the bloodstream. When that happens, anyone with lung or heart disease, or more vulnerable folks like the elderly or children, have a higher risk of death.

While the number and rate of death varies by state, overall urban centers and highly populated regions are worse. Basically, pollution from residential combustion is greater in places with higher population density because more people are heating more homes.

The densely populated east and west coasts are the main sources of residential combustion pollution.

Premature Deaths Due to Residential Combustion 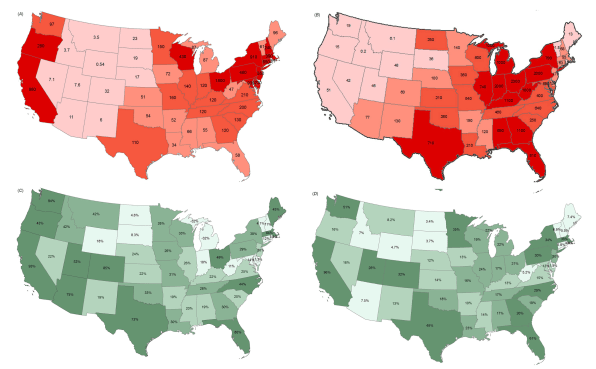 The chart shows the number of premature deaths associated with RC emissions across the states, rated by source. The deaths caused don't necessarily occur in the source state—they're just caused by pollution from that source state.

High performance homes that use require less energy can reduce pollution from residential combustion and the resulting health risks. Also, weatherization programs and other upgrades that reduce energy consumption contribute as well. Behavioral changes also play a role -- wearing a sweater in the winter rather than turning the heat up a notch. Efforts have been underway for decades to improve energy efficiency for homes through building codes and tax incentives. There's one more reason to make it national priority.